The next time you're creating something delicious, give these almond flour alternatives a try. With a few modifications, of course, they are ideal for baking.

8 Almond Flour Substitutes You Must Try

The next time you're creating something delicious, give these almond flour alternatives a try.

With a few modifications, of course, they are ideal for baking.

The ideal gluten-free flour substitute is almond flour. But what happens if you run out?

Almond flour is difficult to replicate because of its nutty flavor and unique texture.

But it's not impossible. Consequently, if you're seeking for an alternative to almond flour, you've come to the perfect place.

Of course, depending on your recipe, some will be better than others. However, all of these alternatives to almond flour are worthwhile to try in a hurry.

Let's discuss almond flour before we begin to substitute it. It's a kind of gluten-free flour with a mildly nutty flavor, as I've already described.

The skins of the almonds are removed, they are blanched and then ground into a powder that resembles flour to create almond flour. Compared to wheat flour, it has fewer carbohydrates but more fat and protein. It's an excellent alternative for baking because of the added fat and the extra moisture makes baked items light and fluffy.

Almond flour works nicely if you're attempting a particularly delicate recipe. It's a great option for cakes, cookies, and other baked items as well.

Almond meal, which is closely related to almond flour and which we'll address first, is the finest all-around replacement.

In the event that you run out of almond flour mid-recipe, there are additional solutions. 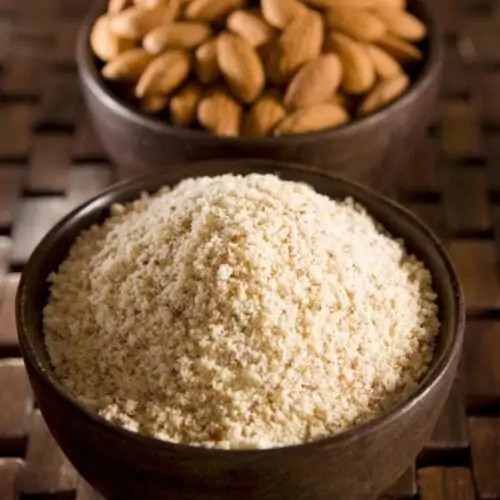 Almond meal and almond flour can be substituted one for the other. The two are not, however, exactly the same.

Almond meal, as opposed to almond flour, is made by blanching and grinding whole almonds. It has a rougher, less polished texture as a result than almond flour.

They taste very similar to one another. Unfortunately, using almond meal when cooking will result in a different texture.

If you can, I advise giving it one more grind. Simply add one or two cups to a blender and process until smooth.

If you want to get rid of the bigger pieces, you can always put it through a sieve. 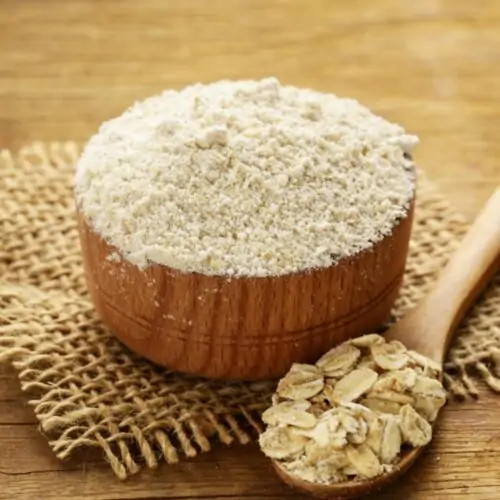 Most people don't keep oat flour on hand in their kitchens. However, if you do have it, you can use it in place of almond flour.

They should be blended until powdery after being poured in. (Around 3/4 cups of oat flour are produced from one cup of raw oats.)

Once it is prepared, replace almond flour in a 1:1 ratio.

Simply keep in mind that oat flour is a little bit dryer than almond flour. As a result, you might need to adjust the recipe by adding another egg or more liquid.

Various types of flour are strewn across a wooden table. 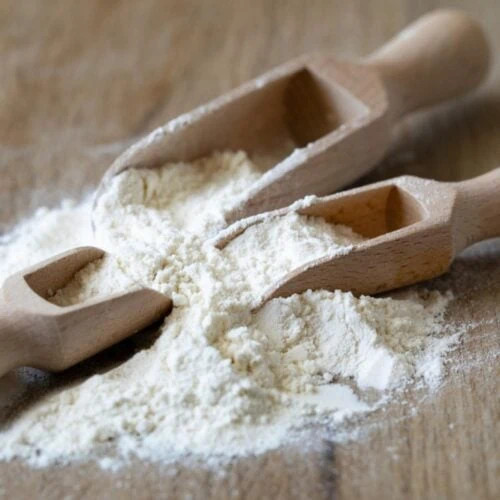 Extremely easy to use and excellent performance are both features.

Furthermore, you are not required to convert anything. Simply substitute equal amounts of all-purpose flour for the recipe's almond flour.

In addition, it is not as dry or difficult to bind as almond flour. As a result, you might be able to reduce the amount of wet ingredients in a recipe. (And maintain the same texture and lightness!) 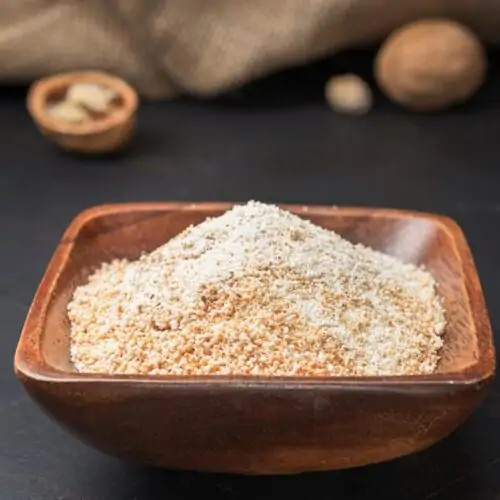 It still contains nuts and is gluten-free. In contrast to almond flour, it has a better texture and stronger binding power.

Plus, it enhances the flavor of your dish.

Replace it with almond flour in a 1:1 ratio. 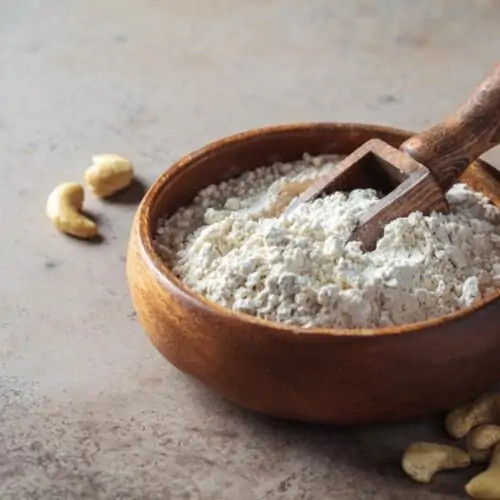 Another gluten-free equivalent of almond flour is cashew flour. With the exception of taste, the two substances are fairly comparable.

Almonds are more nutty and bitter than cashews. It follows that cashew flour has a milder flavor than almond flour.

If you want nut flour without a pronounced nut flavor, give it a try. 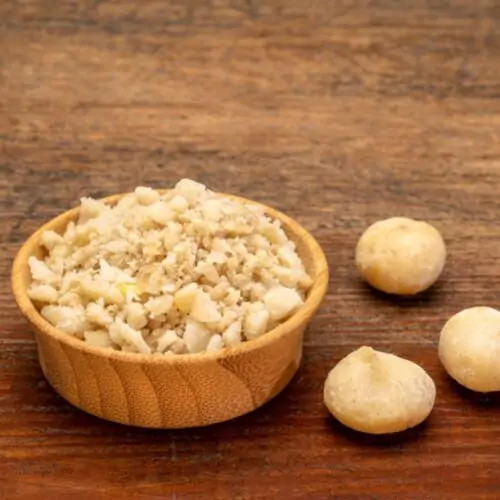 Do you require a nut flour that is both gluten-free and relatively low in carbs? Examine macadamia flour.

Although it still isn't quite "low-carb," it does contain fewer carbohydrates than other nut flours.

In any recipe, substitute it 1:1 for almond flour. It's a particularly wise choice if you're on the Paleo diet.

The bowl of banana flour is white. 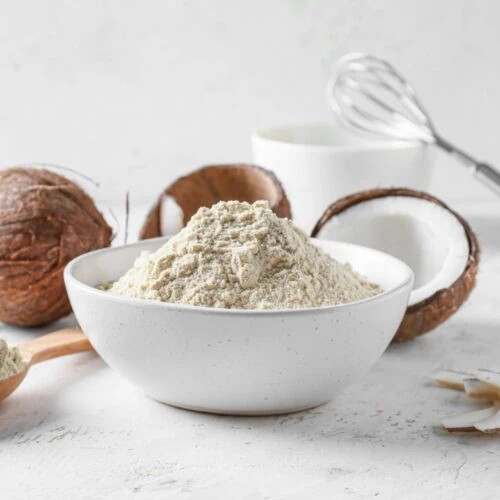 Almond flour can be substituted with coconut flour, although it's not the best option. To be honest, it requires too much effort to be appropriate.

As you can see, almond flour is not dehydrated, whereas coconut flour is. How does that impact your recipe, then?

It basically indicates that coconut flour will absorb a lot of moisture. According to some chefs, it can absorb up to eight times more moisture than almond flour.

So it's not a good idea to substitute coconut flour for almond flour without also changing the recipe. You'll produce bland, dry baked items as a result.

Sincerely, I don't suggest using coconut flour as a replacement. If you must, make sure to add significantly extra moisture.

Additionally, you should use less flour than usual. Try substituting a fourth cup of almond flour for each cup that is needed. 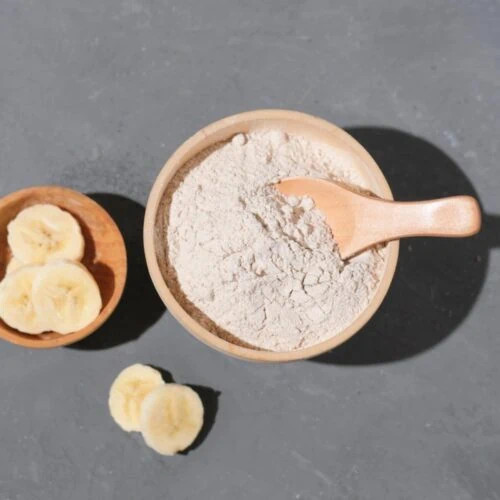 If you're in dire need of an almond flour substitute, banana flour can be an option. But it's not the best choice, just like coconut flour.

Banana flour is fantastic because it is essentially free of anything. It is free of nuts, seeds, and gluten.

(Unfortunately, it has a lot of carbs; have that in mind.)

It's really starchy and dry, which is a shame. These are the reasons I advise against using it in baked goods.

For sauces and soups, though, you can use it in a one-to-one ratio.

You'll need to add more moisture if you're going to try it in other recipes. Banana flour will require more eggs, water, milk, etc. than coconut flour.

In these recipes, you might wish to use less flour as well. (Perfectly 3/4 cup or less for each cup of almond flour required.)