18 Best Italian Food That Your Family Will Adore

This list of the top traditional dishes in Italy will highlight the most traditional and delicious foods from each region of the country. You'll want to yell "Mamma Mia!" the next time you sit down to an Italian meal.

Everyone knows what pizza is; it doesn't need to be explained, but what you're probably familiar with isn't quite the same as in Italy. Pizza has been on the Italian Peninsula for millennia, but the famous pizza Margherita was established in 1889 when Queen Margherita of Savoy visited Naples. According to legend, the queen was sick of French cuisine and asked Raffaele Esposito, a well-known pizza maker, to produce an unusual pizza for her. The pizza with tomato sauce, mozzarella, and basil was approved by Queen Margherita. Raffaele Esposito immediately christened his pizza the Margherita and requested royal approbation from the Queen.

Pizza in Italy is fresh, uncomplicated, and of a reasonable size, allowing each element to shine on its own. There are two types of Italian pizza: Neapolitan pizza "pizza Napoletana," which is thicker and smaller and is also known as Naples-style pizza, and Roman pizza "pizza Romana," which is thinner, crispier, and larger and originated in Rome. 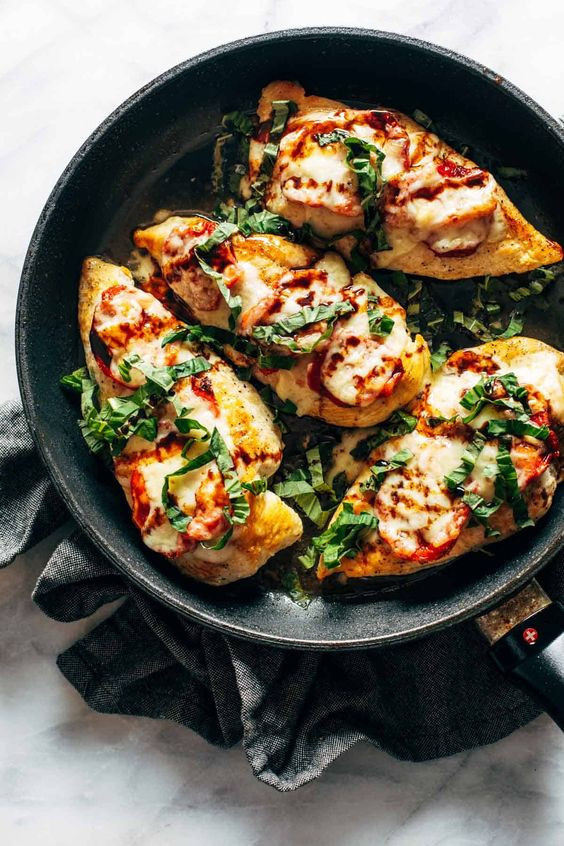 This Caprese Chicken is bursting with flavor thanks to gooey cheese, sun-dried tomatoes, and a subtly sweet balsamic sauce.

While this dish appears to be elegant, you won't believe how simple it is to prepare.

Separately, cook the chicken until it's well browned but still juicy.

Pile on the savory sun-dried tomatoes and cheese slices. 10 minutes in the oven

Don't forget to finish with a generous sprinkle of your balsamic reduction. 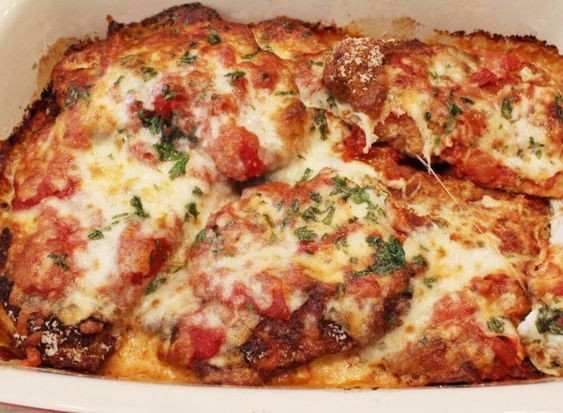 Your entire family will fall in love with classic Italian cuisine like chicken parmesan.

Pound out your chicken breasts incredibly thin and make sure they're all the same size for typical chicken parmesan.

The breading station will include three trays: one for flour, one for eggs and cream, and one for breadcrumbs.

The epitome of the beauty of simplicity... The basic mix of eggs, wheat, water, olive oil, and salt yields almost 400 different types of pasta! Fettuccine, spaghetti, penne, and tagliatelle are some of the most popular forms of pasta. Each area of Italy has its own trademark style, such as Tuscany's pappardelle and Rome's fettuccine. Pasta can be made in a variety of ways, including creamy, pesto, fresh tomato sauce, and even filled. Spaghetti a la Carbonara, cooked with guanciale, egg, pecorino cheese, and black pepper, is undoubtedly one of the most popular spaghetti dishes in Italy, particularly in Rome.

Fried rice balls are known as arancini. The two primary categories are Roman and Sicilian. Both have ragu or tomato sauce, mozzarella cheese, and Arborio rice, which is used to make risotto. The Sicilian arancino recipes, on the other hand, generally include beef and peas. These are the most typical fillings, however, arancini can also be stuffed with other vegetables. Arancini are breaded and deep-fried, giving them a golden and crispy outside, hence the name "Arancini," which means "little orange." They are served with a side of marinara sauce and are one of the best Italian delights available in a variety of locations around Italy, including market stalls, pubs and taverns, and fine dining restaurants. A favorite among the locals!

The Italian dough is so wonderful that it deserved its own bread. Focaccia is an oven-baked Italian bread that falls in between flatbread and pizza. It may appear different in each locale, have various ingredients and toppings, and even have a distinct name. It is known as schiacciata in Tuscany, strazzata in Basilicata, and crescia in Umbria. Typically, it is bread with herb toppings and olive oil. Ideal as a starter or as an afternoon snack.

The Italian cheese culture is so rich that it deserves its own category. For generations, the Italian Peninsula has been surrounded by cheese. The Ancient Romans invented a wide range of cheeses and experimented with them by smoking, melting, and maturing them, laying the groundwork for many famous cheeses present today. How can anyone say no to a delicious slice of cheese, whether it's strong, soft, creamy, grainy, sweet, or salty? Each region has mastered a specific variety of cheese, as is common with other Italian foods, although all are as delicious. The best mozzarella, according to locals, is offered in Southern Naples; it is a fresh type of cheese made with buffalo milk. Parmigiano Reggiano cheese is produced in Parma, Emilia-Romagna. Parmesan cheese, popularly known as the "King of Cheeses," is famous all over the world for its versatility.

A dinner of layers of pasta, meat, cheese, and tomato sauce is as close to culinary perfection as you can get. There is also a vegetarian version, in which the meat is replaced with vegetables, so that everyone can enjoy this delicious Italian dish. Lasagna originated in the Naples region and was originally made with bechamel sauce, ragu, and cheese, but as additional international components became accessible, lasagna evolved into what we know today.

Because rice is somewhat uninteresting on its own, the Italians devised a way to make it more intriguing and delicious. This Lombard rice dish is made with Arborio or Carnaroli rice. Its most popular version is risotto a la Milanesa, which is cooked with saffron, beef or chicken stock (occasionally fish stock), cheese, and lard, all kept together by a creamy sauce made with butter and other spices. In other regions, it is served with a variety of proteins and sauces, giving the risotto a variety of colors while remaining delicious.

Even though truffles can be found in a few other countries, no other country produces them with the same quality and quantity that Italy does. Truffles are a highly aromatic fungus found near the roots of trees in the forests of Piedmont and Umbria between November and March. They are discovered by trained dogs and can be either white truffles, which are stronger, or black truffles, which have a lighter flavor and fragrance. Both are among the most expensive foods on the planet. Truffles will add a strong, but delicious, special fragrance to your pasta dish, salad, or even a breakfast egg.

No, gelato is not the same as ice cream; although it may appear similar, it is not the same as ice cream. Gelato is lower in fat than ice cream and has a greater flavor because it is not blended with water and air. Gelato is produced from fresh ingredients and cannot be stored for long periods of time. Furthermore, it is stored and served at a lower temperature than ice cream, giving the gelato a smoother texture and making it more refreshing while walking through the streets of Rome. One of the best summer desserts... and even better in the winter!

Ravioli is a form of pasta with a filling that is typically served in broth or with a sauce.

Carbonara is another traditional Italian pasta dish prepared with simple ingredients that are packed with flavor. It has an egg, cured pork, hard cheese, and black pepper. Typically, the cheese is Pecorino Romano or Parmigiano-Reggiano.

Cavatelli is little pasta shell made from eggless semolina dough that is typically cooked with garlic and broccoli. Cheese is added to the dough mix in some variations. It's basic, but it's done correctly, and it's highly tasty.

Bruschetta is an antipasto meal that consists of grilled bread topped with vegetables, rubbed garlic, and a tomato mixture. A sliced country bread topped with a variety of toppings, including the evergreen tomato-basil and the innovative mushroom-garlic. The traditional Italian beginning!

Panzanella is a summery Tuscan bread salad. It is not a recipe, but the two elements that remain constant are tomatoes and bread. This salad goes well with a drink of chilled Prosecco and plenty of sunshine!

The delectable tiramisu dish uses coffee-soaked sponge fingers that are piled around and coated with a creamy mascarpone concoction. In Italian, the word 'tiramisu' means 'pick-me-up.' It certainly does, thanks to the caffeine spike!

Finish your meals in the Italian style! Panna cota is a gelatin, cream, and milk dessert. Chilled and garnished with chopped pistachios. Panna Cotta is an Italian word that means "baked cream." This is a simple and quick dessert to make for a house gathering. With just a few ingredients, you can make this Italian delicacy and enjoy it!